As work on the final digital rewards for the Old-School Essentials Kickstarter is entering the end stages, my thoughts are slowly returning to "the next big thing". In this case, the next big thing is the long anticipated Dolmenwood Campaign Book!

This Thing is Huge

The first thing I noticed, upon looking at where I stand with the Campaign Book, is just how big a project this is. The Campaign Book alone is looking like it'll come in at around 200-300 pages (and these are full size pages, not the mini A5 pages of Old-School Essentials!). I also had notes detailing plans to publish anywhere from 3-8 new adventures as part of the Dolmenwood Kickstarter. And that's not to mention the plan to offer a B/X and a 5e version of everything!

It's a really huge project.

My first Kickstarter, Old-School Essentials, was also huge, and stretched the limits of my project management capabilities. So for the Dolmenwood Kickstarter I've decided to take a step back and strip out some of the less essential parts of the plan. I want to get this book published, and I want to get it published within a feasible time frame.

B/X Only at First

The biggest decision I've made, with regard to simplifying the project a little, is to delay the 5e version of the book (and the 5e versions of the new adventures). The conversion from B/X to 5e alone could easily be 6 months' work. My feeling now is that it'd be smoother to finalise everything with the B/X version first, get that published, then move on to the 5e version.

This means that the Campaign Book Kickstarter will just be for the B/X version. I'll either run a separate Kickstarter later on for the 5e version or may simply publish it without crowdfunding.

So my revamped plan is as follows (all open to change still, of course!):

Now that I have a project plan that feels more feasible to me, the next step is simply to finish writing this book! I think the writing is probably about 75% complete, as things stand. It'll still take quite a few months to finish everything up. (And that's once I've finished everything for Old-School Essentials, of course!)

In the meantime, however, I've already started commissioning art for the book! I'm in discussion with various artists, but I can reveal that the following people are involved at this stage:
I'm super excited to have them all involved!

Here's a layout mockup featuring one of Pauliina's chapter heading illustrations. The text and layout is just rough / placeholder, but you can get the idea of what I'm going for with these.

The image depicts the unseason of Colligwyld, where the forest is overrun by giant, spongy fungus which melt into a rainbow-coloured sludge after a few weeks. 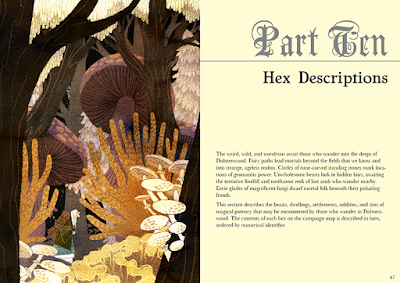 Here's another of Pauliina's chapter heading illustrations, this time depicting a pivotal moment in the history of Dolmenwood, where the forest's wicked fairy ruler, the Cold Prince, was exiled. 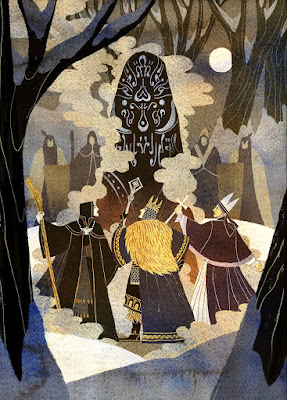 More News When it Happens! 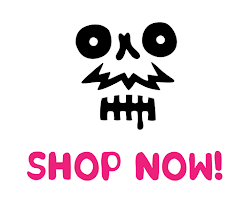